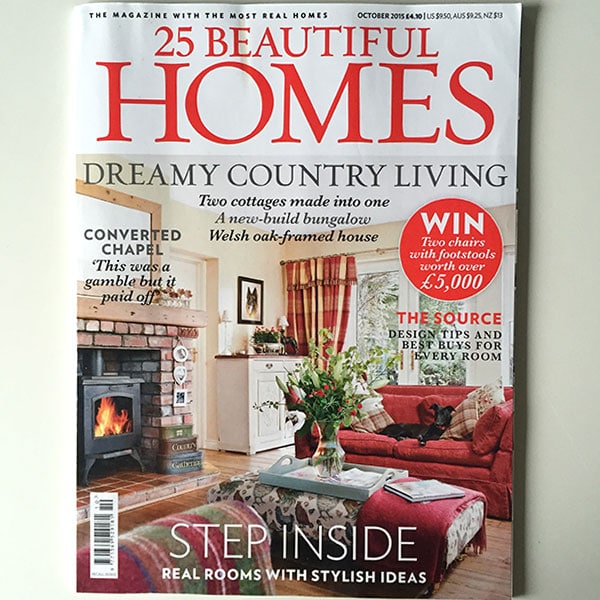 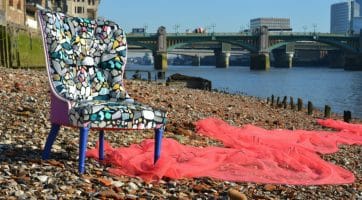 Two Become One, my homes feature about how Eugenie Nixon and husband Guy combined their flats into one spacious family home, appeared in October’s issue of 25 Beautiful Homes. (All copy as submitted.)

Eugenie Nixon and husband Guy lived across two apartments for a decade before finally joining them into the family home they’d dreamed of. Not ones to do things in the conventional order, Eugene was pregnant with their first child when the flat above Guy’s came onto the market, so she snapped it up. For ten years, the couple and their growing family – they now have two boys, plus Guy’s older sons – lived in both apartments, with bedrooms in one and living rooms in the other. They moved between the two via the communal staircase. ‘The neighbours didn’t mind,’ laughs Eugene. ‘They got quite used to seeing us come and go in our pyjamas.’

The main job was to connect the two spaces, and architect Stephen Fletcher came up with a surprising solution – an eye-catching contemporary staircase in the middle of a period property. ‘We know a few people who have done similar conversions, and the biggest challenge is how not to destroy the downstairs rooms with the staircase,’ says Eugenie. ‘We wanted it to take up as little space as possible and I think Stephen’s solution was just brilliant.’ The glass bannister means the flow between the two rooms, now knocked into one, isn’t interrupted.

Another contemporary addition to the space was the minimalist kitchen in the second reception room. ‘I wanted a room that didn’t look like a kitchen – I wanted the kitchen itself to just disappear,’ says Eugenie. ‘Guy had a bit of a wobble, but when he saw how clean and simple it was going to be, he saw the light.’ The kitchen had previously been in a much smaller room, which the couple turned into a utility room and even squeezed a shower room in, sinking the shower into the floor to create sufficient headroom. They moved and widened the door into the utility area creating extra width in the kitchen and providing vital ‘out of sight’ storage space.
Everywhere else, Eugenie and Guy were keen to stay true to the original style of the property. ‘We wanted to respect its Victorian roots,’ says Eugenie. Unfortunately, previous owners had removed a lot of the original features. ‘The cornicing had all been stripped out and there was a hideous concrete fireplace,’ she says. The couple commissioned bespoke fireplaces and had the cornicing replaced by a company that uses original Victorian moulds. ‘The coolest thing was when we smashed through the asphalt outside and found the Victorian tiles underneath perfectly intact, so all we had to do was polish them up,’ says Eugenie, who has inspired her next-door neighbour to do the same.

One trip to a flea market in Paris proved to be pivotal in finding the key pieces of furniture to complete the look. ‘I had an old farmhouse kitchen table, but Guy was hankering after an Eero Saarinen Tulip table, so the jury was out,’ Eugenie explains. ‘Then we went to a flea market in Paris and saw this 1950s Italian marble table. I thought the tag said €9,000, but it actually said €1,200!’ She paired it with Tolix chairs because she wanted something robust enough for four boys. ‘Whenever I see immaculate homes in magazines, I always assume they must have girls,’ she laughs. They sourced a lamp and the statement chandelier that hangs in the stairwell on the same trip. ‘We were only there for an hour and a half, but we really got on a roll,’ she says.
Now it’s finished, the thing that Eugenie values most is a sense of calm, ‘The pared back look and the muted colour palette downstairs make it a real retreat from the hustle and bustle of London,’ she says. ‘It’s somewhere we can just relax and be ourselves.’