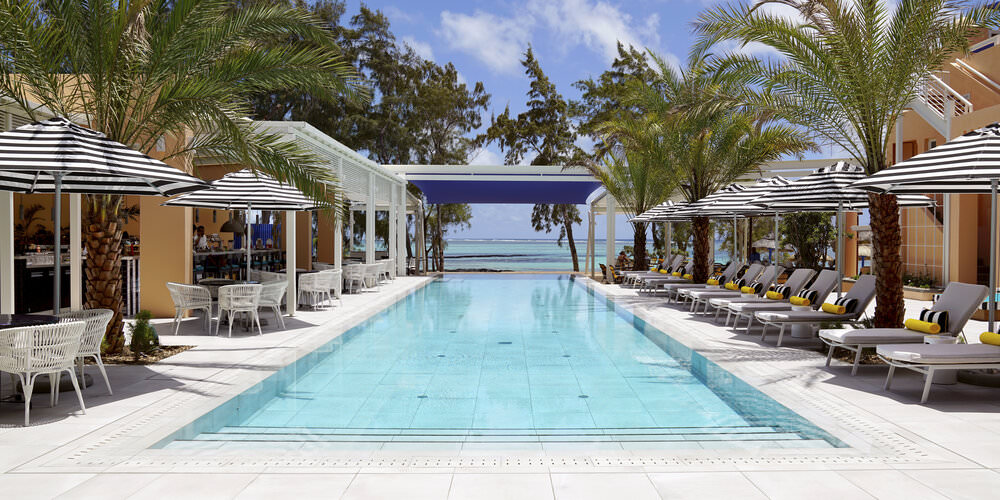 Recently named one of Time Magazine’s ‘Greatest Places’ and a Mr & Mrs Smith ‘Local Hotel Hero’, the SALT of Palmar hotel on the east coast of Mauritius was originally created in 2005 by renowned Mauritian architect Maurice Giraud and has been given a blast of local color inside and out by London-based French artist Camille Walala, with a new interior scheme that runs through the hotel’s 59 rooms and public areas.

Walala, and long-standing collaborator Julia Jomaa, worked closely with Mauritian architect John-François Adams to realize a vision for the dramatic geometric building inspired by both the natural landscape and the man-made environment of the surrounding island. “I was blown away with how many vibrant and bold colors you find around the island,” said Walala. “People paint their houses in the most amazing tones that really stand out against the lush tropical setting. From the emerald green of the plants to the ever-changing colors of the sky, I wanted to marry these warm natural tones to my signature pop colors.”

Described by Time Magazine as “eye-popping Instagram bait”, SALT of Palmar’s beauty is more than screen-deep. The hotel was conceived to champion sustainability, connect with the local community, and introduce culturally curious travellers to the real Mauritius. “This isn’t a hotel that begrudgingly makes concessions to the environment,” said the Mr & Mrs Smith judging panel. “Salt of Palmar literally exists to serve the community and reduce the carbon footprint of the area. And it does so creatively and with tonnes of style, from the beach baskets made of recycled flotsam to the guidebook of the island, written by a team of talented locals.” The hotel has also eliminated all food waste and single-use plastics and sources food for the on-site restaurant from a bio-farm.

Walala was invited to reimagine SALT’s interiors following her work at LUX* Grand Gaube, for which she created a spectacular mural for the resort’s Beach Rouge beach club, but this is her first architectural collaboration. Despite this, she was the obvious choice for The Lux Collective CEO and SALT creator Paul Jones. “Camille Walala’s relationship with color is precisely the same as most Mauritians,” he explains. “For both, color is a vehicle for joy and a means of expressing positivity. She is the ideal artist for SALT of Palmar; I must have been in the hotel 100 times as it developed over the last few months but, every time I see them, her designs make me smile.”

With such a natural fit, Walala might have been forgiven for resting on her laurels, but she and Jomaa still did their homework – exploring the island’s food, culture, and neighborhoods to get a real sense of the Mauritian aesthetic so she could weave that into the fabric of her interiors, helping guests to forge a meaningful connection with their surroundings. “I really wanted to bring what we saw on the road back to the hotel,” she says.

The geography of the island precluded the sourcing of many of Walala’s go-to material choices. “Mauritius is a remote country, and although the selection of products and materials is wide, I had to think of many alternatives to things that I would have loved to use in the styling and build,” she explains. “Because SALT is by the sea and under a strong sun, we had to work with materials which could not be damaged by wind, heat, water, or light. However, I did grow to enjoy the challenge of finding alternatives in the local area – that, after all, is what the SALT philosophy is all about.”

What: SALT of Palmar Hotel
Where: SALT of Palmar Coastal Road, Palmar 41604, Mauritius
How much: From $195
Highlights: The black and white striped fountain at the riad-style heart of the hotel.
Design draw: Head South to explore the most unspoiled part of Mauritius and don’t miss The World of Seashells Museum, home to Eric Le Court’s personal collection of over 8000 shells collected on the island.
Book it: SALT of Palmar Hotel 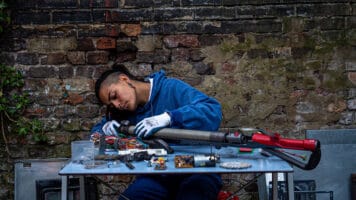 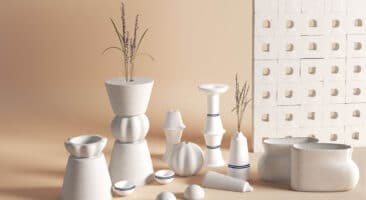 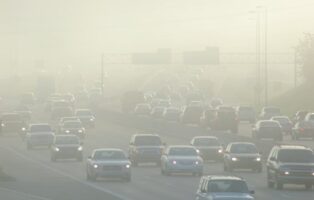 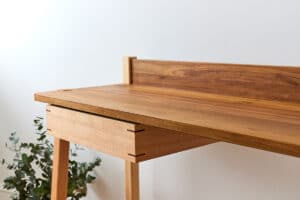