Emma, a wallpaper designer, husband Graham and son Finn were living in a rented house when they spotted their current home on the same street, so they knew exactly what to expect. ‘This house was almost exactly the mirror image of the one we were living in four doors down,’ says Emma. ‘So I thought we would know exactly what to do.’ In the end, the couple lived in the house for a year before starting renovations and found that one change led to another. ‘Replacing the main staircase meant reconfiguring the bathroom, masses of extra insulation in the roof meant we had to have paddle stairs up to the top floor…’ she says. ‘In the end, we didn’t do anything we had planned to!’

Despite not sticking to their original plans, it was a pretty efficient renovation. The family moved out for six weeks while a team of builders from Derbyshire headed up by Emma’s Dad – a retired builder himself – moved in. Emma and her Dad project-managed and in six weeks the team fitted a new staircase, replaced the roof – fitting a dormer to create space for an en-suite bathroom for Finn, built extensive bespoke storage for Graham’s photography equipment in the spare room, replaced the family bathroom, and extended the kitchen into the side-return. 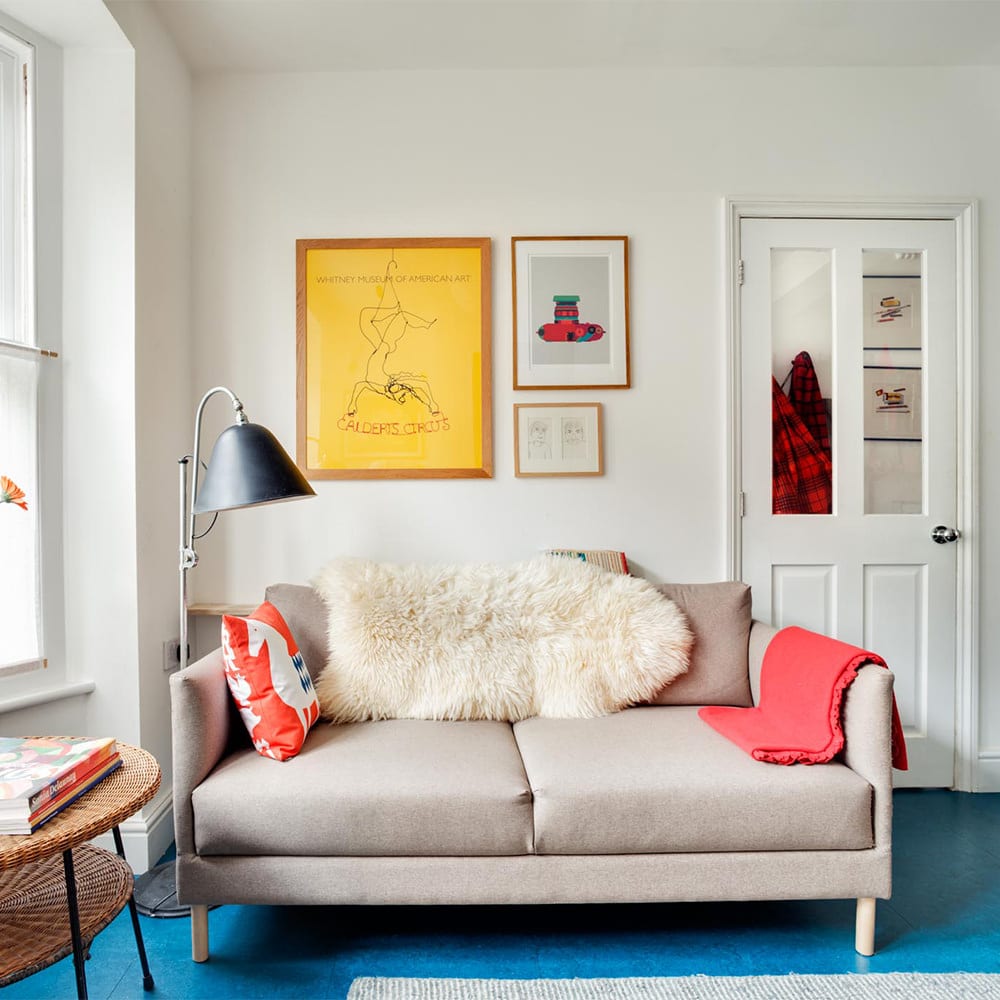 The first job was the main staircase. ‘We wanted new stairs, because the original ones were just too steep,’ says Emma. But altering the staircase meant re-planning the family bathroom to create the necessary space. They took the opportunity to replace everything and create a light, bright family bathroom.

A dormer in the roof created enough space for an en suite bathroom for Finn’s bedroom. ‘We let Finn have that room, so when he has friends over he takes them up there and we’ve still got the rest of the house,’ she laughs. Emma’s Dad advised them to add insulation not only to the roof but also to every external wall – being a Victorian house; the property doesn’t have cavity walls. This meant losing three inches around the edge of every room, and compromising on paddle stairs up to Finn’s room, but Emma says it was worth it: ‘We hardly ever have to heat the upstairs of the house because it is just so warm,’ she says.

Once the top floor was done, the builders moved downstairs to the spare room on the first floor. ‘We call it the Mother Cupboard,’ laughs Emma. ‘Partly because it’s where my mother stays when she visits, but mostly because it is one mother of a cupboard! There is as much storage as you could possibly fit in there – it’s basically a garage in spare room form.’ Graham and Emma both planned to work from home and while Emma now has an office with friends in Lewes, Graham stores all of his photography equipment in this room.

The final project in this speedy renovation was the kitchen. ‘We had inherited a 1980s kitchen which was tiny, dangerous and horrible,’ says Emma. ‘You could stand in the middle and touch two opposite walls at the same time.’ By extending the kitchen to fill the side return and using extensive glazing, they created a spacious, light-filled, family kitchen. ‘It has made a massive difference – we doubled the size of the kitchen,’ she says. ‘And the glass extension means that the whole of the downstairs is so much lighter.’

From start to finish, the whole project took just six weeks. Graham was working in New York for five of the six weeks, and Emma stayed in a local holiday cottage with Finn, so she was able to keep an eye on progress by visiting every day. ‘It honestly wasn’t that stressful,’ she insists. ‘I loved seeing everything stripped totally bare, so you could see the shell of the house, but my favourite moment was Graham’s reaction when he got back from New York – I think he was quite impressed!’ She does admit there was one tense situation when a neighbour got stuck behind the concrete lorry on their cul-de-sac. ‘The glass extension was being put up at the back and the concrete was arriving for the floor all on the same day, so it was already quite a stressful day,’ she says. ‘Then we trapped a neighbour, who needed to collect her son from school, on the wrong side of the concrete lorry and couldn’t move it. Luckily my car was the right side of the lorry, so we found a solution.’

Inspired by a love of colour and mid-century design, the interior came together quite naturally – with a little help from Pinterest. ‘I think this was when I first fell in love with Pinterest – I put together a ‘house’ mood board and immediately started to see patterns, such as certain colours, emerging,’ says Emma. ‘Graham and I have always been quite flamboyant with colour. We both went to art school, so perhaps we’ve been inspired by the artists we admire. I am a massive Alexander Calder fan and he uses a lot of primary colours – and I also love Alexander Girard and of course Charles and Ray Eames.’ The vision for the space was Emma’s but Graham did have some input, such as choosing the yellow for the stairs and the mango orange for the kitchen cupboards. ‘I let him choose two colours,’ she laughs, ‘but I’ve got to hand it to him – they are pretty good colours.’

Predominantly white walls provide a backdrop for mid-century furniture and a colourful collection of art and personal objects that are displayed throughout the house. The couple’s existing dining table provided a starting point, soon enhanced by the 1960s teak display unit – a lucky find on eBay at just £400 that turned out to be the Danish PS System. ‘The whole scheme was designed around our dining room table, because we are a family that sits at the table rather than in the lounge,’ explains Emma. ‘That is where we entertain, where we work, where I host a craft night once a week – it’s a cliché, but it really is the heart of our home.’

Emma bought basic kitchen cabinets and commissioned a local carpenter to make the doors, which she painted bright orange. ‘The kitchen floor stayed concrete for ages, because we didn’t know what to do with it,’ says Emma. ‘But luckily, we live next door to the principle of the Inchbald School of Design and he said, “You’ve got to go with teal!” so teal lino it was!’

Now that the whirlwind renovation is complete, what does the family make of their colourful home? ‘What I love about our house is it is incredibly welcoming,’ says Emma. ‘Nothing is hidden ­– it’s all very open. Everybody knows where everything is, so they just help themselves. It’s a really welcoming friendly house.’ Not bad for six weeks’ work.

This story was originally commission by Period Living and has since been republished in 25 Beautiful Homes. All photography: Bruce Hemming.